TO LEARN OF THE DEATH OF PROF. YASH PAL TODAY (July 29), five days late, is a tragedy of Indian journalism, for which an  actress’ flirting or affairs is a greater news.

Thank you Dr.Lekshmi D. Ramesh for your LinkedIn post on “The Turning Point”

Yes, ‘Turning Point‘, Prof. Yash Pal’s TV programme on  Door Darshan   when it was a monopoly, must have created interest in science among many children  who saw it. Media now think programmes which do not titillate are useless in getting TRPs, which alone matter to them today.

Some decades ago, I had interviewed the great scientist Dr. C.N.R. Rao at the Indian Institute of Science of which he was then Director. He told me the story of how, when he was a schoolboy, he went one early morning to the IISc campus to collect  botanical specimens for a  school project of his.(Many may not know IISc campus is a treasure house of biodiversity and a haven for bird-watchers).

There he was stopped by an elderly, dark, turbaned man who asked him what he was doing there, volunteered to take him around and help collect the specimens and talked of science as they went around the scenic campus.

That was the turning point in the life of Chintamani Naga Raja Rao.

“The conversation changed my life. It made me a scientist and opt for pure sciences instead of applied sciences that could have helped me earn much more money,” Dr. Rao told me.

The man in turban was Sir C.V.Raman, then Director of IISc. Dr. Rao was occupying the Nobel laureate’s chair.

Back to Prof. Yash Pal, resisting the temptation to talk (or brag) about my own meetings with Dr.Raman, accompanying a classmate, his relation, to the railway station as he was on way from Bangalore to Delhi (many may not know he hated flying when it could be avoided) to take to him some filter coffee  and drinking water (no bottled mineral water in 1960s).

Prof. Yash Pal’s name .brings back many memories. He is too well-known for me to write about his life and work.

Taking a batch of Mass Communication students in 1990s on a study tour of Delhi, I came to know of a meeting where a friend was being presented an award as a lady journalist.

It was a meeting addressed by the founder-director  of National Informatics Centre, Dr Seshagiri. He spoke of the Information Highway and how IT would change tomorrow’s world. Among the audience was Prof. Yash Pal.

After the brilliant speech many asked questions. Prof.Yash Pal asked, “When books came, much of India’s knowledge which came down by word-of-mouth due to India’s oral tradition, was lost. When all knowledge goes online, will be not lose what is in books but not in a database?”

Dr. Seshagiri admitted there was such a danger. Prof.  Yash Pal brought science to the common man.

Will Prof. Yash Pal, though both in books and databases, remain in the memories  of the old, like me, and be lost when they die?

A version of this was posted  on July 30, along with a picture of Prof. Yash Pal. Readers received  only the picture with birth and death dates and RIP under it. The long text vanished. It had disappeared three times when it was being written on the blog post. Then it was written on Word file, cut and pasted on the blog.  And it vanished again, with only the picture remaining. So I wrote this again, a fifth time, hoping it will remain. Six people clicked on ‘like’ thinking I posted only the picture as a tribute to him.

It left me wondering whether it was hint that I should write three-liners or single para posts as many do. Or that with me becoming 78 in two months, it is ‘stoppable’.      Who has time to read?

The  UnstoppableAfterSeventy.Wordpress.com blog itself got deleted or became inaccessible to me.    So Good Bye

TO WRITE ON  A  DEATH FOR THE second  consecutive day is not unusual for someone nearing it himself.

As I wrote yesterday and earlier, I will tell my own personal experience about Dr. Udupi Ramachandra Rao, popular as Dr. U. R. Rao, who passed away on July 24 (the same day as another scientist, Prof. Yash Pal, I wrote about yesterday..)

Dr. Rao was well-known for the launch of Aryabhata satellite and his contributions to India’s space science. END_OF_DOCUMENT_TOKEN_TO_BE_REPLACED

TECHNOLOGY HAS BECOME A PART OF OUR lives today. We cannot live without gadgets any more. Children download, pause, take pictures on smartphones or send  WhatsApp messages even before they start school.

There is need, therefore, for instructions that even idiots (like me) can understand. If not many (especially the elders) will be like the unlettered rural parents doling out huge sums to their son in city  to buy ‘perpendiculars.’

Asked to show them the ‘thing’ he would pretend to be shocked at their ignorance that after use in the lab the ‘perpendiculars’ had  to be ‘submitted’ to the professors. END_OF_DOCUMENT_TOKEN_TO_BE_REPLACED

MANY TALK OF WOMEN AS THE ‘WEAKER SEX’ OR TALK of  them as victims of a patriarchal social system. They, obviously, may not have  heard of Sanjukta Parashar IPS, who can put many male officers to shame.

A post (in Marathi) which went viral  on social media said, “When you see the slim and beautiful lady pass before you, you could not have  END_OF_DOCUMENT_TOKEN_TO_BE_REPLACED

WHEN YOU ARE AT THE EXIT GATE OF LIFE, waiting for the door to open, all you are left with are memories.

Memories are good or bad. Remember to forget the bad ones, for fretting over them will not alter them. Remember the smiles, the the good that people did to you, the help from unexpected quarters,  the happy occasions. These memories bring you happiness.

Forget the ‘Memory Guru’ who made you work for many hours on the book you ‘help’ him to write and then gave you a dud cheque, forgetting that there was nothing in his bank . Remember cab driver who searched you out to return the iPad yo you wiu left behind.

The good memories are your balance in the bank of life. You have to try real hard to recall them, but the bad memories flood your mind.

MY JULY 22 POST  ‘THE LONG AND SHORT OF IT’ MUST HAVE BEEN REALLY SILLY.

One reader put a note on it, asking everyone to read, but did not reblog it. No one else commented.  I said that I wrote a short piece once because no one reads long posts. In the process I seem to have, inadvertently belittled other short blogs (“of just a few words”).

How can I write against poems? My first byline in print was for a poem. Ridicule writing short tales or on ‘prompts’? Was not  58 years of writing for print just on assignments or on what was asked? And “three line pieces” cannot be wrong. Editors keep on asking for fewer words and all through I had to keep cutting down.

People not reading? Of course, if it is worth it would be read. Lack of comments? In my book, I mention an instance of journalists in a particular city being angry with Sharad Pawar, who was then Chief Minister, for some reason. In a Press conference, after his initial remarks, there were no questions,  except to ask if it was all he wanted to say before they dispersed. An astute politician, he understood and sent an aide to all agency and newspaper offices to settle the issue.

All I can say, long or short, let us keep saying. You write to express, not for ‘like’s or comments. Or stats. 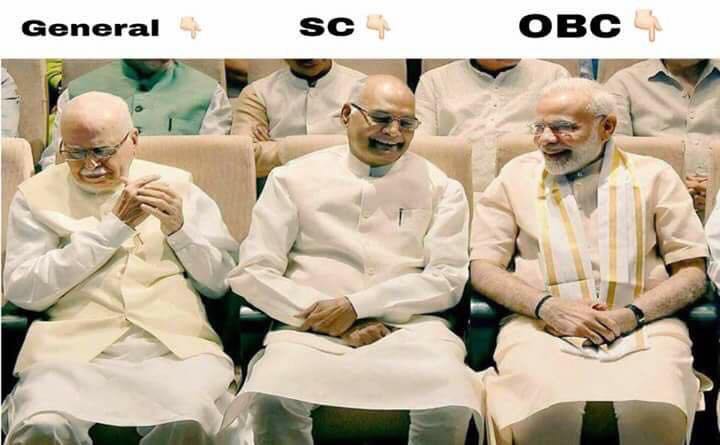 RAM NATH KOVIND HAS BEEN ELECTED THE PRESIDENT OF INDIA WITH A HUGE majority. The ‘communal’ upper-caste  BJP had made another ‘Dalit’ the President.

Meira Kumar, put up by the ‘united’-(only over 130 cross votes)-Opposition for her caste (belonging to a ‘Dalit’ or oppressed caste) and her dynasty (daughter of Jagjivan Ram, for long THE face of  the Dalits in Congress party and a minister for decades) has proved, by getting over 34 per cent votes, that caste still counts, but is not the determining factor.

The political culture the  Congress party nurtured has made it a dominant feature of Indian politics. So it was no surprise that a photograph that went viral over social  of media (see above) mentions the caste of senior BJP leader Advani (expected by many to be next President), the President-elect and Prime Minister Narendra Modi.

It did not matter that 1,581 voters with a criminal record voted in the election. Out  of them 3,640  are “crorepati MPs” (millionaires). The Association for Democratic Reforms has revealed that out of the 4.852  MPs/MLAs eligible to participate in the election  1581 (33%) members have declared criminal cases against themselves in self-sworn affidavits.

The role of big money in “democratic” elections everywhere need not be stressed. Add to this the coercive power of those with musclemen working for them and the three ‘C’s of Indian politics – Caste, Cash and Coercion – become evident.

In earlier posts I called writing on politics “scavenging with pen”. As a journalist I hated to be known to Ministers and those in power, though contacts  matter in the profession. And yet many of my posts are about politics – mostly Indian. Politics pervade every aspect of life in this developing country.

Reason, ideology and welfare of the majority have no role in it.  According to Congress Modi is the Prime Minister of the BJP-led coalition and not India. Opposition it thinks, has to support China or even the terrorists. Electoral politics have fallen to this level.

Will Kovind be a “People’s President” in these tragic circumstances?

THE  ONLY ONE  (OR ONE OF THE TWO OR THREE)  WHO READS ALL MY POSTS,  A former student of my journalism class, commented on  a recent post, “Good…but could be a longer post.”

I replied that I found blog posts of a few words get scores of ‘like’s and followers while long, studied, researched ones with a lot of information get very few.  And, moreover, END_OF_DOCUMENT_TOKEN_TO_BE_REPLACED

‘ “India is a nice house on a bad street” – This is not a blog post by me. It is a  simply brilliant.  five-minute introductory  speech given in London at an event, by a young professional of Indian origin.

His name, Dhritiman Biswas. He spoke extempore and the points are reproduced here. The topic was a round table on: ‘India – is it a gigantic success or a colossal failure?’ This is what he said:

“Ladies and Gentleman, I am glad I am merely introducing the debate and not participating as in my humble opinion the question itself is wrong.

India, unlike, many western paradigms cannot be analysed in black and white, in linear equations or algorithms such as this.

India is a concept devised by the British and therefore in many ways a contradiction, a process , a work in progress.

Our poverty index suggests we are a hopeless failure, our mobile usage however may allude to resounding success.

This question cannot be answered because it is the wrong question to ask. The right question is –CAN INDIA BE ALLOWED TO FAIL? JP Morgan elegantly points to the ruins of emerging markets and says India is a nice house in a bad street!

I would add further… The Western world is founded on the principles of liberal, free market, democracy. Outside the OECD (Organisation for Economic Co-operation and Development)  and the western (oAnglo Saxon Protestant)  world, literally in the entire globe,  there is one other example of this experiment — and that is IndIa.

We are the West’s and England’s most natural ally… We speak the language, sing Beatles songs, read Wodehouse and want to grow up to be Sherlock. Despite our many failings we are a giant and a colossus and for the sake of the world let’s hope we succeed.”