IF YOU ARE IN SEVERAL WHATSAPP GROUPS, especially of seniors, the number of posts you get about elders being neglected, sent to old-age homes or treated badly and those which stress the importance of loving parents outnumber all other types of posts.

END_OF_DOCUMENT_TOKEN_TO_BE_REPLACED 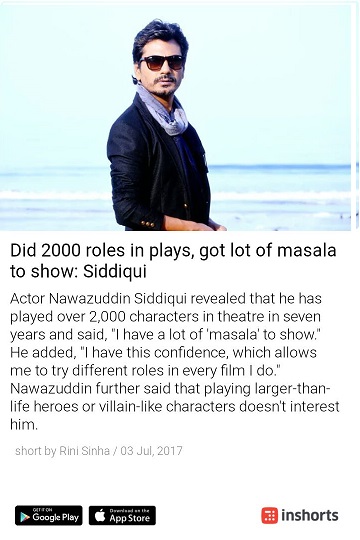 HOW  MANY TIMES DID YOU VERIFY IF a good quote you saw on the social media is genuine? If you admire the celebrity and the quote sounds true, you just cut and paste it or copy it.

But you cannot do so if you are a target of criticism simply because of your name, your community/religion or your ideology. Paresh Rawal, MP and an excellent film actor,  saw a quote attributed to the best President India ever had – Dr. APJ Abdul Kalam and put it in a tweet.

Pat came a troller on Twitter pointing out it was a fake quote. The ‘tolerant’ liberals who complain of the “saffron   party’s intolerance” could not tolerate such a mistake – more so if it is against Pakistan.

A day later another actor, Nawazuddin Siddiqui was quoted as saying that in seven years as a stage actor, he had acted 2000 different roles. Teaching ‘editing’ for a decade as a journalism lecturer, I used to say every copy-editor should do a little of basic maths if any figures occur in  the ‘copy’.

No one criticized or reacted to it

Indian stage is almost dead.  And yet Siddiqui could participate in plays 2000 days out of 2555 (seven years have 2555 days) playing different roles. He could not have done two or three different plays on a single day as dramas have no morning, noon, first and  second shows, as cinemas do.

Where in India is the theatre movement staging plays almost every day and that too only one show for each drama,  with all the rehearsals and script-learning involved?

Of course no one – liberal or otherwise – questioned his statement. Rawal of is intolerant as he is pro-Modi and should be trolled.

If you question Siddiqui, you are communal!

WITH BOTH THE  MEDIA, mainstream or the other type, and the digital social media, all plagued by paid news and fakenews, losing credibility, it is hard to believe any information that floods our devices.

So when the news of Tej Pratap Yadav, whose claim for being a Minister in the Bihar Cabinet is that he is the son of RJD supremo END_OF_DOCUMENT_TOKEN_TO_BE_REPLACED

INDIAN NEWS CHANNELS ARE MORE concerned about the frivolous affairs of celebrities, thanks to their race for TRPs The  newspapers are  imitating them, thinking that is what the readers want.

And in the bargain they have lost their credibility. They  remain  sources  of entertainment and titillation more than serious thinking and ideas. Paid news has become the order of the day, a rule rather than exception. Social media  once held a glimmer of hope as sources of serious information, but are now plagued by fake news, propaganda, rumors and manipulation  by vested interests.

In this context, therefore, I am sharing here a post shared by a friend on social media. It END_OF_DOCUMENT_TOKEN_TO_BE_REPLACED

MEIRA KUMAR, THE CONGRESS CANDIDATE FOR the upcoming President of India election says her nomination by the Opposition “united” against the ruling National Democratic Alliance was a ‘matter of ideology and giving it a communal or caste colour was unfortunate.

If you don’t take it as the joke of the decade, you may ask:What is the ideology involved?

The NDA announced its candidate, Ram Nath Kovind, a Dalit (belonging to oppressed and downtrodden castes) first. Till then the “united” opposition was speaking in different voices. THEN it announced the name of Meira Kumar whose qualification is the daughter of Jagjivan Ram, for decades the face of the Dalits in the Congress. 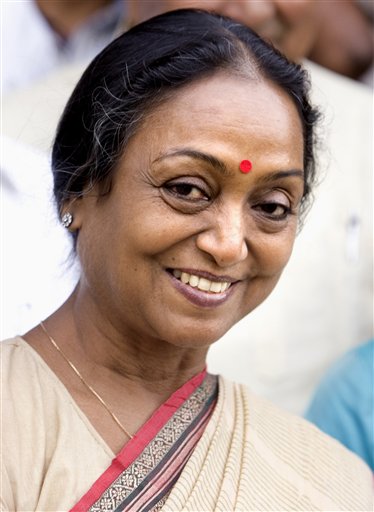 Both caste and dynasty qualifications fulfilled.

Earlier the “united” opposition toyed with the idea of putting up Dr. M.S.Swaminathan, an eminent scientist and father of India;s green revolution. A victim of North-South politics when he was director general of    the Indian Council of Agricultural Research (popular as Pusa Institute) from 1972 to 1979,  he became the Director General of the International Rice Research Institute (1982–88) which is located in  Philippines by the Food and Agriculture Organisation of the UN  as India, the rightful claimant as the major rice-producing country, did not show interest and pursue the matter.