Lt. Col. Sandeep Ahlawat (courtesy: SOLDIERING)
HAVING BEEN A journalist since 1956 (though first newspaper appointment letter only in 1958) I am dismayed at today’s journalism of Fake News, paid news and sensationalism for TRPs.

It was therefore heartening to see the rejoinder of Lt. Col. Sandeep to a cartoon published by The Economic Times equating the Chief of Army Staff (COAS) to a housing society guard.

‘Liberals’ who were silent when thousands of Kashmiri pandits were uprooted and thrown out of J&K are now shedding copious tears for Rohingya Muslims of Myanmar as India refused to admit them.

A political party which lives on vote bank politics may have inspired their sorrow. As it is a Times of India group publication, I presume it may not be a case of paid news.

I take the liberty to publish the entire rejoinder here:

Dear Economic Times/Mr R Prasad,
Your Cartoon on (my Chief of Army Staff and) the Chief of the Army Staff of the second largest Army in the world is hopelessly distasteful, and downright repugnant and flawed on the following counts.

2. A guard at the housing society does not put his life in the line of fire when situations like 26/11 happen but COAS and his men will not let a Kasab and Co inflict death and mayhem on our countrymen, come what may!! Remember the heart warming sight of soldiers slithering down the chopper, yes… the then COAS had ordered them??

3. A guard at housing society will not land a chopper at rooftop to save a pregnant lady and her unborn child but COAS and his men will stand between nature’s fury and our countrymen like a rock of Gibraltar!!

4. Guard at the housing society does not receive body bags of his men at technical area of Palam airport every alternate day, but COAS does this with a heavy heart and a bleeding soul and he and only he understands the pain of saluting the mortal remains of our fallen comrade !!

5. Last but not the least the guard at the housing society has not taken an oath to serve the Union of India, observe and obey all commands of the President of India even to the peril of his live. COAS and his men will save both the constitution and the Editorial staff of Economic time even at the cost of certain death so that you live in free India and exercise their FoE with Impunity!!

PS. Mr R Prasad, please don’t take advantage of the fact that ….. you as a cartoonist enjoy full complement of constitutional rights along with fruits of freedom which the COAS has provided you at the cost of his and his men’s life. Please show some character and don’t brutalise the hon 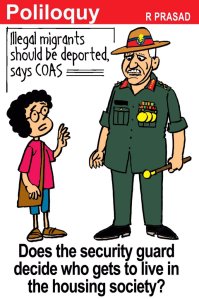 our of the only organisation that not only keeps the nation together but keeps it “First” always and every time!! And yes illegal migrants must be deported forthwith because you and your ilk do not understand National Security and business of war fighting just as I and my tribe does not understand the business of making cartoons!!

Lt. Col. Sandeep Ahlawat is a serving officer in Indian Army. Previously, He had sent a legal notice to Twinkle Khanna and Akshay Kumar when they wanted to auction the “Original Naval Officers Uniform” that Akshey Kumar had worn in movies Rustom. The star couple had to withdraw the auction after Col Ahlawat’s objection