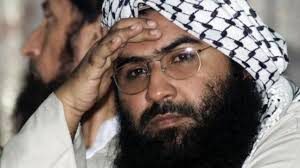 COMMUNIST CHINA HAS, for the fourth time, exercised its veto power in the United Nations Security Council to save Jaish-e-Mohammed founder and chief terrorist Masood Azar from being declared a global terrorist.

And Rahul Gandhi, President of the dynasty-ruled Congress Party (who met Chinese leaders months ago along with sister Priyanka, her husband Robert Vadra and his mother Maureen in a gesture of friendship} has declared that Indian Prime Minister Narendra Modi was a coward who was afraid of China’s President Xi (no, not an 11-member cricket team but a lifetime President of the country).

Rahul, the great-grandson of Jawaharlal Nehru who coined the slogan ‘Hindi-Chini Bhai Bhai’ before India lost a war to China and said that “my heart goes out to the people of Assam” who were fleeing the Chinese aggression, is not a coward like Modi. It is only communal Assamese who hated Nehru for this tearful statement of surrender.

Modi’s diplomatic offensive and tour of scores of countries, including those never visited by an Indian Prime Minister, resulted in China being isolated in the world body. All the other members opposed China, backing India and threatened other steps against Azar. Of course, there was no such gang-up on the three other occasions when China backed Azar terrorism. The Congress-led UPA was then in power in Delhi.

Communism may hold that religion is “the opiate of the masses” but it does not matter to China that Jaish-e-Mohammed means ‘Army of Mohammed”, the main Prophet of Islam. Such small things are unimportant as China feels that Masood Azar is the very personification of goodness. He kills innocent people as they are ‘kaafirs’ who do not believe in Islam. He fights for the rights of invaders from abroad to occupy parts of Kashmir and throw out its residents, the Pandits, all in the interests of peace and harmony.

China has its own Muslim problem and therefore cannot anger its Jihadi Muslims by standing with India. According to China and the Indian National Congress, those opposing Jaish are communalists while supporting the killing of innocent men, women, and children is purely secular.

More details of what Rahul said against the ‘coward’ Modi could not be heard as they were downed in the thunderous applause of Congressmen for adding ‘coward’ to the list of abuses for Modi, like thief (chor), uneducated uncouth,(anpadh-gawar), low-born (neech) and tea-seller (chaiwala) — ha ha ha — which they hurled at him.

The deafening applause by tail-wagging Congressmen who describe Jeneu-wearing Brahmin Rahul, grandson of Feroze, as Ram and his sister Priyanka as Durga, is all in the interests of secularism. This is election time and the louder you shout exhibiting loyalty to the dynasty, the greater your chances of being nominated.

Jaish deserves support for another reason; it too is dynastic like the Congress. Almost all its office-bearers are members of Azar’s family.

And the pro-China factions of Communists, who once said “Chairman Mao is Our Chairman”, add to the tumult by clapping – more for China than for Rahul whom they now support in the interests of secularism, though Congress dismissed their first elected government in Kerala.

Meanwhile, the intolerant BJP workers are hoping he would spread more such pearls of wisdom. For, has not Manishankar (neech admi) Aiyar’s invitation to sell tea at Congress session helped Modi become the PM?