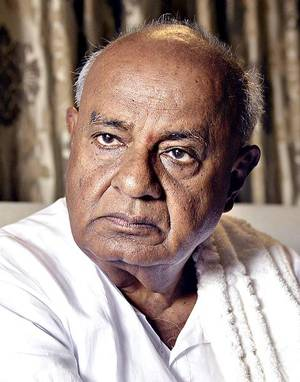 The man who became India’s Prime Minister during the post-Emergency Janata rule, HD Devegowda, is the first (hopefully the only) leader to support the Congress move to have as India’s next Prime Minister Rahul Gandhi, the grandson of Indira Gandhi who had imposed Emergency and jailed thousands of Indians.

That does not come as a surprise as Rahul’s Congress is supporting the Chief Ministership of Kumaraswamy, Devegowda’s son, though his party JDS won the LOWEST position in Karnataka Assembly election.

The parallel between his choice as PM and Rahul’s candidature is significant. Devegowda’s became the compromise candidate just to keep out a Brahmin, Ramakrishna Hegde and Rahul alias Pappu (by his own admission) to keep out an allegedly Brahminical party, the Bharatiya Janata Party.

The announcement by Devegowda is nothing more than an admission that he was prepared to pay any price for Congress support to keep his son in power.

That Rahul running the country may be a disaster, that he himself has been anti-Congress for decades does not matter to him.

Both stand for dynasty rule.

Any price for power is the real motto of all Indian political parties, almost all of them headed by dynasties.