THE CONGRESS  AND ITS allies in the mahagut(ter)bandhan have shown once again that they would stoop to gutter levels and personal attacks to settle political scores.

Added to the list of personal abuses heaped on Prime Minister Narendra Modi (chaiwala, Unpadh Gawar, Chor) is the latest: that he got 44 CRPF jawans killed just before the Lok Sabha polls to get public sympathy and more votes. The charge came from an ally in the gutter-alliance (mahagut(ter)bandhan), Mamata Banerjee of Trinamool Congress who has been playing appeasement politics to get minority votes.

At the same time, Congress President Rahul Gandhi came out with a discovery that at the time of the terrorist attack on the CRPF motorcade, the Prime Minister was shooting for a party propaganda film and enjoying a boat ride.

Vikram Bhalla of Times Fact Check of the Times of India media group has checked and found the Congress claim that ‘Primetime Minister’ Modi was shooting till  6-30 p.m. and enjoying a boat ride at Jim Corbett national park while the Pulwama attack took place at 3-33 pm (not 3-10 as tweeted) by Rahul Gandhi, was false.

The fact check showed that Modi was NOT shooting at Corbett at 6-30 p.m.   Government sources said Modi did shoot a tourism-promotion film earlier but was so upset about the delay in being informed about the attack that he did not eat anything.  Bad weather also delayed his departure for Delhi as helicopters could not fly. He had to drive on a road full of potholes. 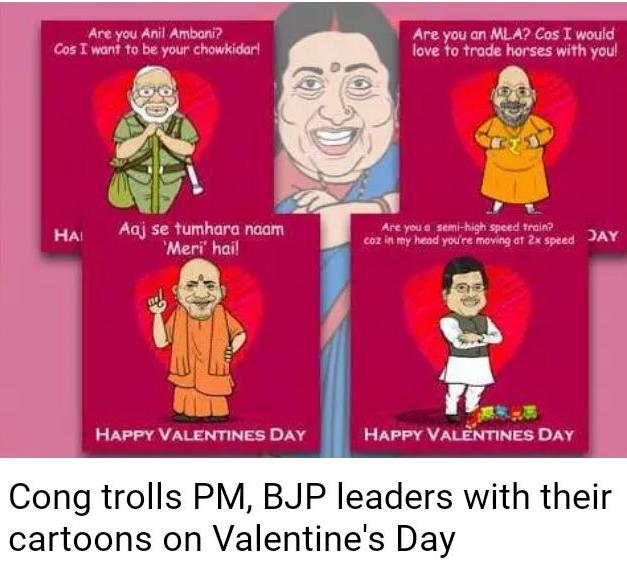 Besides the tweet by Rahul, the party’s Chief Spokesman R. S. Surjewala also called a Press conference on the same day, February 14, to repeat the charge and add that the PM was “enjoying snacks” at the Rampur guest house.

He also flashed photographs claimed to have been taken at the “boat ride” (but clicked before the ride) but none of the PM eating.  On cue, many sycophants Twitter accounts, with thousands of followers, attacked Modi for being callous and uncaring about the killings.

On the other hand, a newspaper published a photograph of Rahul Gandhi checking his mobile phone (obviously for WhatsApp messages) during the three-minute silence in Parliament in memory of the slain CRPF Jawans. Perhaps he could not wait for three full

minutes before planning the false attack on Modi.

As soon as he came to know of the attack Modi was on phone with the Home Minister Rajnath Singh and the National Security Advisor Ajit Doval despite signal problems,

No wonder Modi later said in a campaign speech that perhaps Rahul Gandhi had prior knowledge of the attack. Congress leaders had earlier visited Pakistan and urged it to work for removing Modi as PM.  A photoshopped Instagram picture was posted showing boot prints on Modi’s back after “being kicked”. A Punjab Congress minister, Siddhu, said Pakistan was not to blame for the attack!

BJP chief Amit Shah on Saturday alleged that  Rahul Gandhi was insulting slain Army soldiers by claiming that the 2016 surgical strike across the LoC was conducted to win the Uttar Pradesh Assembly elections. He said that today Army jawans have developed a sense of pride that their government is standing behind them rock solid.

There are also fringe elements supporting Modi who tried to use the occasion to target Muslims and Kashmiris in particular. The Government and the Supreme Court issued orders to ensure that Kashmiri students studying in different parts of the country were not harassed.

It cannot be denied that the political debate in the country has reached the lowest-ever levels. Can Congress, which ruled for almost 70 years, deny responsibility for the decline in the country’s political culture?