‘Didi’ Mamata Banerjee who refused to address a meeting along with Prime Minister Narendra Modi simply because she was greeted with shouts of protest when she objected to ‘Jai Sreeram: but chose at another meeting to recite a Muslim prayer, has written to Sonia the boss of dynastic Congress and other parties to come together to eradicate BJP and it’s communalism. For her being Hindu is communal but seeking Muslim votes is very secular. At the same time she can flaunt her Gotta and Brahmin origin to get Hindu votes which she fears losing in the polling being held today. Whether the electorate will see through this game will be known only on May 2. However, the scourge of fake seculars and liberals playing vote bank politics is a serious issue. They pretend that all Muslims who stayed back in India when the country was split on communal basis did so to reject the 2 nation theory ad were secular. That their choice was for the sake of property and their social contacts alone is not accepted. If this is true why did they vote for pro-partition forces is not explained. How did only Muslims get elected from seats where they had majority or ‘secular’ Congressmen only when there were no Muslim candidates,, or why so many terrorist ‘sleeping cells’ exist with local Muslim suoport in states like Kerala??

Many such questions reain unanswered. The ‘sickulars’ object to the ‘remote’ being in the hands of highly qualified agenda me who gave up everyting for the cause of RSS but do not mind a semi literate Italian who amassed wealth due to dynasty support or some mullahs holding it. This is taking a fashion fad too far Can they deny that India never tried to spread it’s faith though it had great impact on many nations, that it was once a predominantly Hindu country or that the Constituent Assembly had debated at length on calling it secular. When the Saudi kung visited the country, Nehru had all idols in Kadhu covered, but namaz on roads, blocking them, continues in India. But indians are not secular!

Many hate Modi for various reasons like being a Gujarati or a Hindu or an RSS pracharak and above all for breaking the monopoly of one dynasty over the top post in India. So a spate of  criticism over the construction of the statue was expected. The main objection was (from Congress) that there was no such statue for Jawaharlal Nehru, India’s first Prime Minister and originator of the ruling dynasty, or for Mahatma Gandhi called the Father of the Nation or Dr Bhimrao Ambedkar the new god of neo-Buddhists and Dalits.

Some, who consider all politicians despicable, argued that the amount of nearly Rs. 3000 crore spent for the statue could have been used to build over one lakh schools or 2.8 lakh rural toilets, both  sadly lacking in the country.

The Statue of Unity, as the Patel statue has been named by Modi,  is almost twice as tall as the Statue of Liberty near New York in the USA which is 93 metres or 305.11 feet). It is taller that the Buddha statues at Spring Temple in China (120 m or 393.t ft.) and at Ushika Daibutsu in  Japan (120 m or 393.7 ft.) regarded as the third tallest in the world.

However, according to the website ‘The Mysterious World’  which lists’ the ‘Top 10’ in  many fields, the third tallest statue in the world, situated in Monywa, Myanmar  has a height of 116 meters. It is again of the Buddha. The construction of Laykyun Setkyar started in 1996 and completed in 2008. The statue actually stands on a 13.5 m throne. 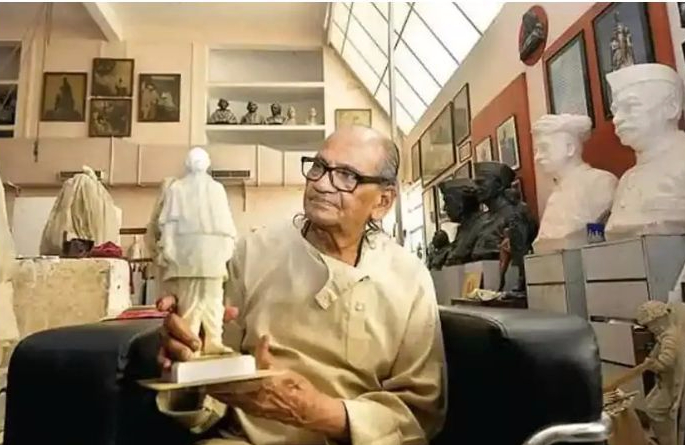 This is not the end. The sculptor 93 year old Ram Vanji Sutar, who designed and built the Statue of Unity for Larsen and Tourbo company of Bangalore, India, is also building in Mumbai the 121.92 m (400 ft.) tall statue of Chatrapati Shivaji and Dr. Amebkar statue of  76.2 m (250 ft.) height.

Significantly the three statues next-tallest to the Statue of Unity are of Gautama Buddha, also of  Indian origin. The Gujarat government is also building a 108 m tall statue of Buddha – which would be world’s tallest of him in the sitting posture.

Congressmen and Dalit politicians and the Shiv Sena (which would predictably attack Modi’s Bharatiya  Janata Party for making Patel’s  statue taller than that of Chatrapati Shivaji Maharaj), oppose the statue for political reasons and not because of the cost.

Others against Statue of Unity  would oppose it only as they are against all statues but have destroyed or disfigured only those of Hindus, but not because “a poor country like India” could  not afford to spend such huge amounts on non-developmental items.

True the statues would not feed the poor or provide education or toilets in rural areas. The same argument was used when my friend Vasaant Sathe, Minister for Information and Broadcasting at the Centre, favoured Indian television switching over to colour. Was colour TV needed for ‘poor’ India?

Had Indian TV remained black and white, would it not have strengthened the belief of most Europeans and Americans that ‘Injuns’ live on trees or that India is a nation of snake charmers?

The same argument would have prevented India building so many new modern airports and many other projects. Those who argue this way are ‘determinists’ holding that after Independence the country should have concentrated ONLY on education or ONLY on roads or ONLY on removing casteism. There can be many arguments on such single aims

But determinism (like the Congress Party’s belief in dynasty rule)  has been proved wrong. We do need development in different fields, as one can promote the others.

True, most statues serve no purpose except emotional.  Many old status are badly maintained and are nothing but repositories of bird droppings. Some cannot even be identified by most people;  their identities and relevance lost in history.

But some, like that of Sardar Patel who had united India and made it one country, certainly have a major role to play.

JUST WHEN YOU ARE RESIGNED TO THE FACT THAT ALMOST NO ONE reads your blog posts, someone surprises you with a comment.

Five days ago I wrote about the bonanza of development Nagpur, “the heart of India” as the country’s central point, is about to get due, not to the long overdue industrialisation but to the enforcement of GST from July 1.

Not one Nagpurian seems to have read it, as none reacted, though links to the blog were sent to many. Suddenly I learnt it was the 100th.  I felt ‘UnstoppaleAfterSeventy’  was ‘stoppable’ after 100.  So I stopped writing.

END_OF_DOCUMENT_TOKEN_TO_BE_REPLACED

REMEMBER THE TIME, NOT LONG AGO, when every

South Indian in Delhi, Lucknow, or Rajasthan or anywhere in the North was referred to by the locals as a ‘Madrasi’?  Or every North Indian in the South a Marwari?

The ignorance of, and misconceptions about, linguistic or ethnic groups other than their own  has been massive, but is reducing gradually. Earlier people from south moved north for jobs. Most ‘babus’ were Tamilians and almost all nurses, anywhere in India, Malayalees (they mostly are,  even now).

Migration, to some extent, brought Indians with different languages, faiths and cultures a little closer. There used to be a National Integration Council and when a crisis like war or a major disaster occurred efforts were made to make all the citizens feel united.